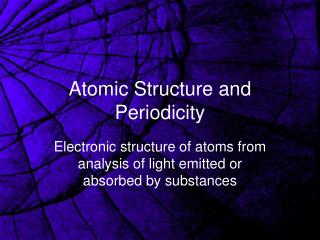 Atomic Structure and Periodicity. Electronic structure of atoms from analysis of light emitted or absorbed by substances. Radiation energy transmitted thru space in form of waves. Electromagnetic radiation Chemistry UNIT 3 - . periodicity. 3.1 the periodic table. 3.1.1 describe the arrangement of elements in the periodic