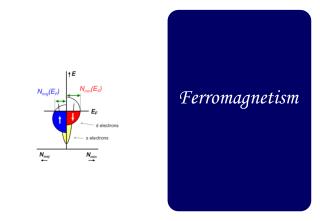 About the possibility of proton ferromagnetism in DA white dwarfs - . a . i . sery , brest state a.s. pushkin university

Ferromagnetism - . at the curie temperature tc, the magnetism m becomes zero. tc is mainly determined by the exchange j.

Magnetism - . magnets and magnetic fields. we will study ferromagnetism in this lecture. it is so named because many