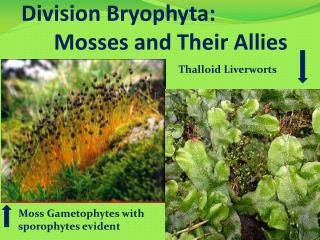 Division Bryophyta : Mosses and Their Allies Division Bryophyta : Mosses and Their Allies

Kingdom Plantae - . they include familiar organisms such as trees, herbs, bushes, grasses, vines, ferns, mosses, and

The Life Cycle of Bryophytes - . bryophytes are diplohaplontic plants with a heteromorphic alternation of generations

Mosses and Ferns - . both do not produce seeds both are considered “simple” plants both produce “spores” at some