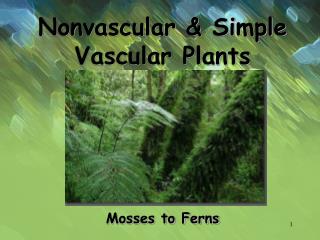 8.2 Mosses, Hornworts, and Liverworts 8.3 Ferns and their Relatives - Simple plants. 8.2 mosses, hornworts, and

Plant diversity Chapter 22 - . objectives: 10.0 distinguish between monocots and dicots, angiosperms and gymnosperms, and

Nonvascular Plant - . eunseo lee. nonvascular plant definition. a group of plants that do not have a vascular

Introduction to plants - . chapter 12. warm up. how many types of plants do you know? can you name them. objectives .

Seed Plants - . outnumber seedless plants 10 to 1 they are food—rice, peas, squash they make materials like clothes,

Intro to Plants and The Vascular System - . 5.2. kingdom plantae. plants evolved about 500 million years ago from simple

Nonvascular Plants - . breathe and food. all plants obtain their food through photosynthesis. they take in carbon dioxide