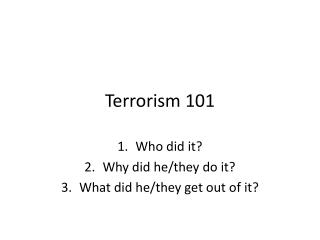 Terrorism 101. Who did it? Why did he/they do it? What did he/they get out of it?. Definition of Terrorism:. September 11, 2001 Terrorist Attacks Coordinated suicide attacks on the U.S. 19 terrorists hijacked 4 airliners Hijackers intentionally crashed: Department of Defense AT Level I OCONUS-A Training Introduction - . september2013. 1. about this training. designed by