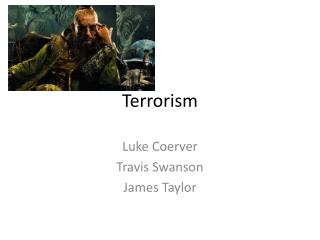 Terrorism. Luke Coerver Travis Swanson James Taylor. What is Terrorism?. The use of violence and threats to intimidate or coerce, especially for political purposes The state of fear and submission produced by terrorism or terrorization

What is Terrorism? - . terrorism. what is it? where does it come from? why is it used? how can we prevent it? what do we

Terrorism - . reflections on terrorism. we could just focus on what our readings and our model tells us. but, then we

Terrorism - . by t aylor petty. what is a terrorist?. definition- a person who uses terrorism in the pursuit of political

TERRORISM - . what is it? why does it exist? can it be stopped?. definitions of terrorism. us department of state.

Age of Terrorism - . terrorism. terrorism took on a global aspect at the end of the 20 th century the belief that the

Increasing Impact of Terrorism - . 1960s to present. what is terrorism?. terrorism is the use of violence on civilians by

Eco-Terrorism...? - . eco-terrorism. refers to acts of terrorism, violence or sabotage for ecological, environmental, or

Understanding Terrorism in the UK - . dr. douglas weeks handa centre for the study of terrorism and political violence

SS474: Terrorism and Counterterrorism - . lesson 10: organizing to fight terrorism. to win the war on terror, we will:

The Economics of Terrorism Insurance - . neil doherty the future of terror risk insurance university of southern

The Making of a Terrorist - . gregory evans institute for biosecurity. features of contemporary terrorism. terrorism will

The Making of a Terrorist - . gregory evans institute for biosecurity. features of contemporary terrorism. terrorism will