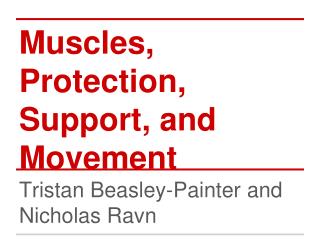 Muscles and Movement - As level anatomy and physiology. muscles and movement. 3 types of muscle. cardiac – where found?

Option B – Muscles Movement and Fitness - . b.1.1 state the roles of bones, ligaments, muscles , tendons and nerves in

Muscles and Movement - . topic 11.2. human skeleton. axial skeleton supports the axis, or trunk of the body. consists of

Muscles and Movement - . the joint. best unit representation of how the body moves. where two or more bones contact

11.2 Muscles and Movement - . the joints in our body provide mobility and hold the body together. most joints include

MUSCLES AND MOVEMENT - . to know the meaning of origin and insertion of a variety of muscles to understand the different

Support System: Bones, Joints and Muscles - . sepup unit b: activity 16. what are the functions of bones?. support

Support System: Bones, Joints and Muscles - . sepup unit b: activity 16. what are bones made of?. function of bone

Muscles, movement and the skeleton - . start. the skeletal system is a-maze- ing. to carry on with the pp click the red

Concept 49.5: Animal skeletons function in support, protection, and movement - The various types of animal movements all

Cellular Movement and Muscles - . cellular movement. movement is a property of all cells. some cells (such as this