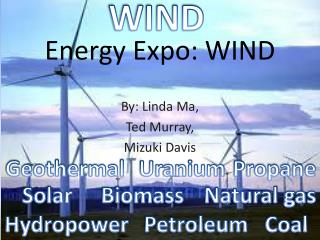 Auto Expo 2016 - The 2016 auto expo is just around the corner and it promises to be bigger and better this time. to be

It Blows You Away - . &quot;coal, gas and oil will not be the three kings of the energy world for ever. it is no

Science, Energy, and the Environment - . final exam review. areas . 1. all of the following are forms of indirect solar