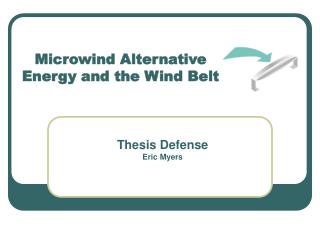 Microwind Alternative Energy and the Wind Belt. Thesis Defense Eric Myers. Introduction. Goals of the Research Recreate the original prototype of the windbelt generator Maximize the output voltage Design an improved version of the windbelt . Questions to be answered.

Wind Energy - . by emma and mentor karin wadsack. how wind energy works. wind is a type of solar energy. heating by the

WIND ENERGY - . wind energy. wind is created by: a. uneven heating of the atmosphere by the sun b. irregulaties of the

The energy and the wind power farms in spain - . alternative energies: the energy for the future?. spain has a large

Wind Energy - . by: efrain rocha . wind. i picked the wind energy because its reliable and it’s a renewable resource

Alternative Energy It’s Pros and Cons - . by xxxxxxxxxxxx. pros of wind energy. endless and renewable clean to make and

Wind energy    - . how does wind energy work . using the wind to create electricity has been around for a long