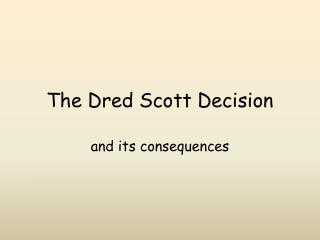 The Dred Scott Decision. and its consequences. By the end of this lesson you will…. Know and understand the impact of the Dred Scott decision on the development of sectionalism in the U.S. PLTS FOCUS –Creative thinking. Who was Dred Scott?. African American Slave

“IF THERE IS ANY UNIVERSAL MARKS OF A MANAGER, IT IS DECISION-MAKING.” - . decision-making and decision?. decision

Musculoskeletal Decision Making Tool - . this tool is currently in development and work is underway to refine and enhance

Managing Decision Making and Problem Solving - . learning objectives. after studying this chapter, you should be able to:

Decision Theory - Introduction what makes the difference between good and bad decisions? good decisions may be defined

The Decision Process in Operations - . clearly define the problems and the factors that influence it develop specific and