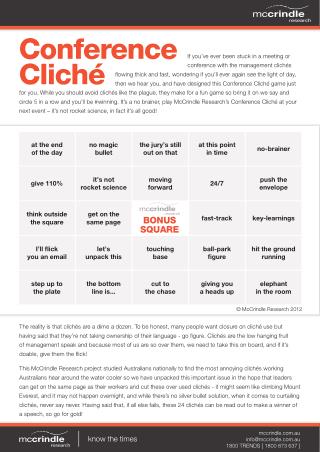 If you’ve ever been stuck in a meeting or conference with the management clichés
flowing thick and fast, wondering if you’ll ever again see the light of day, then we hear you, and have designed this Conference Cliché game just for you. While you should avoid clichés like the plague, they make for a fun game so bring it on we say and
circle 5 in a row and you’ll be #winning. It’s a no brainer, play McCrindle Research’s Conference Cliché at your next event – it’s not rocket science, in fact it’s all good!

The reality is that clichés are a dime a dozen. To be honest, many people want closure on cliché use but having said that they’re not taking ownership of their language - go figure. Clichés are the low hanging fruit of management speak and because most of us are so over them, we need to take this on board, and if it’s doable, give them the flick!

This McCrindle Research project studied Australians nationally to find the most annoying clichés working Australians hear around the water cooler so we have unpacked this important issue in the hope that leaders can get on the same page as their workers and cut these over used clichés - it might seem like climbing Mount Everest, and it may not happen overnight, and while there’s no silver bullet solution, when it comes to curtailing
clichés, never say never. Having said that, if all else fails, these 24 clichés can be read out to make a winner of a speech, so go for gold!

Parenting the i-Generation - Parenting children in technological times is indeed a challenge. in this brief powerpoint,

Australian Communities Report: A Demographic & Social Analysis of Religion & the Church in Australia - This

Game Design - . why study game design in cs?. it's fun and interesting. might be in a one-person company or project be