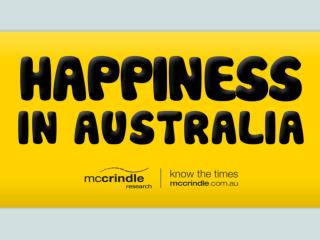 To mark the inaugural UN-declared International Day of Happiness on March 20, 2013 we put together the National Happiness Barometer.
This research shows that as a nation, we don’t feel as happy as we did 5 years ago. For every person who feels that we are happier than we were in 2008, 11 people say we’re not as happy.
More than half of the population state that they are about average in happiness, 29% say they are happier than average, and 17% are less happy than average.
Income levels significantly influence the perceptions of happiness. Those in households in the lowest earning category ($15,000 below average) are far more likely to believe that as a nation we are not as happy as we were 5 years ago (65%) compared to those in the top earning quintile of which just 44% say we’re less happy than we were.
But before we go thinking that it is all about money- while the highest 20% of households by earnings perceive that they are probably happier than average (after all they earn more than average so they must be happier than average right?!), the reality is that those with the highest proportion of above average happiness are those with below average income.

Project - What is your idea of happiness?. question 1:. 1.happiness is nothing more than good health and a bad memory..

THERE IS NO WAY TO HAPPINESS. HAPPINESS IS THE WAY. THE BUDDHA - . strasser, kathleen powell, erin lim, nurulayni kline,

What We Want More Than Happiness A lecture on Subjective Well-Being and JDM - . ann marie roepke jdm 10.17.11. happiness.

Happiness - . chapter 12. happiness overview. the search for happiness is high on the list of themes in the humanities we

Global Happiness - . rhonda winters hsp 406 spring 2104. what is happiness? can happiness be

Does money buy happiness? - . yuchen lin, senior in psychology. the implication from psychological studies of happiness

Happiness - . what is it?. we all desire happiness. but what does &quot;happiness&quot; mean? is happiness eating

Happiness In Marriage - . ephesians 5:22-25. happiness in marriage. last week we discussed the idea of happiness we

HAPPINESS INGREDIENTS - . brought to you by motea oana olarescu ana. contents. what is happiness? ingredients of

Meaning and happiness: Looking at the big picture - . richard eckersley national centre for epidemiology and population

HAPPINESS No Fear or Grieve - . by suleman imdad. happiness is emotion in which one experiences feelings ranging from