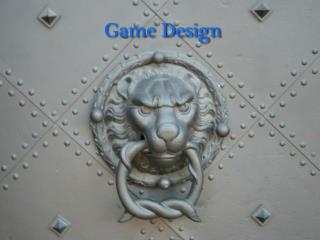 Game Design. Why study game design in CS?. It's fun and interesting. Might be in a one-person company or project Be able to speak the same language as the designers Be able to evaluate, contribute, advise Research Where else?. Recommended book. Fundamentals of Game Design Game Design - . thoughts and new concepts. chapter one : why write this book?. kids also move on from certain game as

Game Design - . by michele fisher. a brief history. computer games started in the 1960s earliest games were developed by

Game Design - . who is a game designer? everything in a game that adds value to the player experience has affected the

Game Design - . mr. gebhart. what is game design?. the art of applying design and aesthetics to create a game to