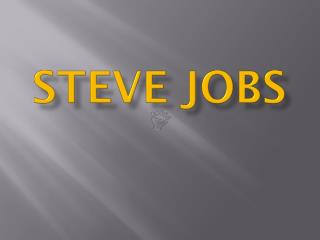 STEVE JOBS. STEVE JOBS--MAN OF VISION. Early Years. Steve Jobs was born on February 24 th 1955. Steve was adopted at birth by Paul and Clara Jobs. His birth parents were not married and having children from unwed relationships was frowned upon in the 1950’s.

Software Engineering Jobs in India - It and software jobs openings in chennai, bangalore, hyderabad and delhi for job

Chapter 6 Recruiting - . introduction. once an organization identifies its human resource needs through employment

How to Apply for a Federal Job - Finding and applying for jobs in the federal government ... federal jobs are highly