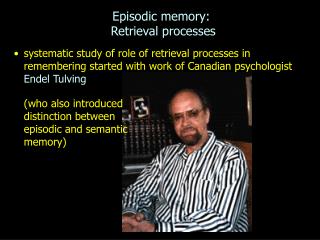 MEMORY AND ESP - . an overview of research in light of the first sight model jim carpenter. provide some theoretical

The Processes of Memory - . memory- the input, storage, and retrieval of what has been learned or experienced. encoding

Memory - . memory. the persistence of learning over time through the storage and retrieval of information your memory is

Retrieval: How We Recall the Past from Episodic Memory - . pattern completion and recapitulation episodic retrieval and

Memory and Intelligence - . ch. 8 &amp; 9 . memory. memory persistence of learning over time through the storage and

Memory - . part 2 retrieval. retrieval . retrieval is the process of getting information out of memory storage. retrieval

What is Memory? - . the processes of encoding, storage &amp; retrieval. what is memory?. the encoding , storage and

THREE KINDS OF MEMORY - . episodic generic procedural. what is memory?. process we use to remember knowledge or skills

The Role of Prior Knowledge in Human Reconstructive Memory - . mark steyvers pernille hemmer university of california,

Episodic Memory - . life events are stories about yourself. that is, they are structured in memory in the same manner as