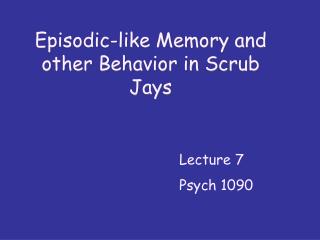 Episodic-like Memory and other Behavior in Scrub Jays Episodic-like Memory and other Behavior in Scrub Jays. Lecture 7 Psych 1090. I’ve done things a bit differently in this lecture…. assigning only a review paper for the earlier material. and giving the details in the lecture. What is episodic memory?. unique, personal, past experience.

Episodic-like Memory and other Behavior in Scrub Jays

Seeing things differently! - . 1 sam 16:7 but the lord said to samuel, &quot;do not look at his appearance or at the

Retrieval: How We Recall the Past from Episodic Memory - . pattern completion and recapitulation episodic retrieval and

Introduction to Psychology Suzy Scherf Lecture 9: How Do We Know? Memory - . memory - what’s it for?. why don’t we

Reaching Students Through The Odyssey: Epithets and Episodic Illustrations - Why teach the odyssey?. themes in the