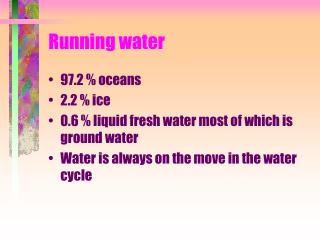 Running water: Rivers and Streams - . weathering, transport and deposition. the water budget and groundwater. the

The Science of Water - . we are surrounded by water; we are made of water. water in our world. water is necessary for

Running Water - . running water is the most important geologic agent in eroding, transporting and depositing sediment

Erosion by Running Water - . water has more power to move large particles than wind does. the greater the volume and the

Protecting Source Water: The First Step in the Production of Safe Drinking Water - . the first step is protecting source