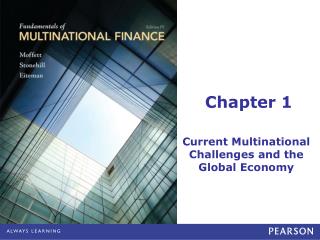 Current Multinational Financial Challenges and the Global Economy: Learning Objectives. Examine the requirements for the creation of value Consider the basic theory, comparative advantage, and its requirements for the explanation and justification for international trade and commerce

CHAPTER 3 - . strategic and financial logistics. learning objectives. to appreciate how logistics can influence an

Leadership and Management in Multinational Companies - . chapter 14. presentation outline. what is leadership? global

Achieving financial stability under OFR - . the scope of our course today. understanding the requirements of the code

t he environment - . sustainability and. learning objectives to recognise the global challenges for food production . to

Chapter 2 Challenges for Managers - . describe the factors that affect organizations competing in the global economy.