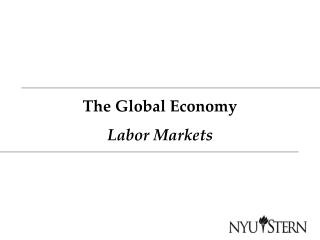 The Global Economy Labor Markets. The idea. Regulation can be good or bad Can facilitate productive activity Can also be an obstacle to it Needed: balance Today’s examples Labor markets (first half) Financial markets (second half) Both essential to economic performance . Roadmap.

The U.S. Economy: A Global View - . chapter 2. introduction. all nations confront the central economic questions of what

An Industry and Economy in Transition: Overview and Outlook for P/C Insurance Markets - . phoenix, az june 6, 2012.

Economy &amp; markets after the financial crisis What have we learned and where are we heading? Economics, UiO,

Financial Institutions and Markets - . the markets. outline of contents. a recap of semester one money markets capital