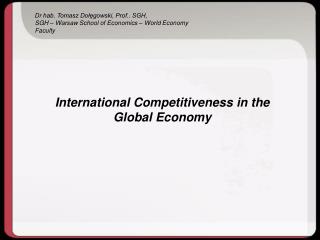 International Competitiveness in the Global Economy International Competitiveness in the Global Economy

USI 140- International Partners: - . laying the foundation for the qep putting freshman in a global context by john f.

Engineering Economy - . chapter 1: introduction to engineering economy. the purpose of this course is to develop and