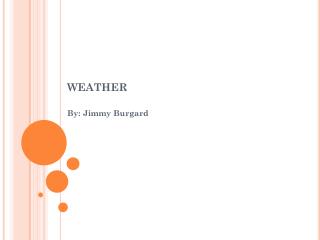 weather. By: Jimmy Burgard. What is evaporation?. evaporation is the process by which water changes from a liquid to a gas or vapor. if you put an ice cube on the ground in the summer it will melt and then it will evaporate. The higher temperature the more evaporation. 1.

The Atmosphere - . meteorology is the study of the atmosphere and the processes that cause weather. i. weather vs.

Types of Severe WEATHER and Fronts - Objective: can i use meteorological data to predict weather?. types of severe

Weather Forecasting - . predicting changes in our atmosphere. what causes changes in the weather ?. air masses / air

Weather Maps - Weather &amp; climate. weather maps. weather is the state of the atmosphere at any one place or time .

Air Pressure and Wind - . chapter 6. pressure. hear this term often in weather forecasts but what does it mean in the

Cold Weather Clothing - . cold weather clothing and the importance of layering. remember: your primary shelter against

Weather theory - . kyle black carol cushman. environment and flying. as pilots, do you need to have a basic understanding