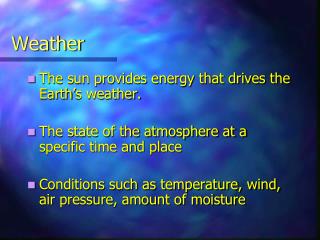 Weather. The sun provides energy that drives the Earth’s weather. The state of the atmosphere at a specific time and place Conditions such as temperature, wind, air pressure, amount of moisture. Temperature – measure of average amount of motion of molecules Fast = warm Slow = cool.