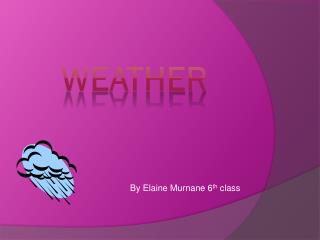 By Elaine Murnane 6 th class . Weather. Why is summer warm and sunny?. The Earth is tipped to one side as it moves round the sun. Some of the year, the north half of the Earths faces the sun. Then the sun is higher in the sky, making the weather warm. This is summer. When the