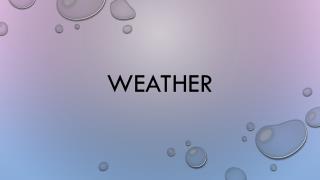 Weather. What is weather ?. Weather is the day to day conditions of a particular place. Ex. Sunny, rainy, hot, cold These conditions are caused by atmospheric pressure, humidity, and temperature. . Atmospheric Pressure. Pressure is the weight of the atmosphere on the Earths surface.