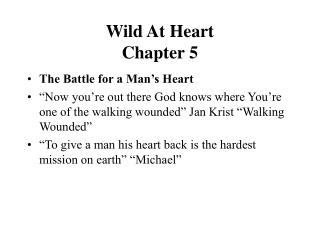 Wild At Heart Chapter 5. The Battle for a Man’s Heart “Now you’re out there God knows where You’re one of the walking wounded” Jan Krist “Walking Wounded” “To give a man his heart back is the hardest mission on earth” “Michael”. Blaine’s Bully story Wild At Heart Chapter 7 - . healing the wound lyrics to desperado the deepest desire of our hearts is for union with god.

Wild At Heart Chapter 9 - . a battle to fight: the strategy “…if you do not face up to the enemy in all his dark

Wild At Heart Chapter 8 - . a battle to fight: the enemy “enemy-occupied territory- that is what this world is” c. s.

Wild At Heart Chapter 4 - . the wound every boy in his journey to become a man, takes an arrow in the center of his

The Wild Swans at Coole - . wb yeats. background. yeats wrote this poem in 1916, when he was fifty one years of age.

Chapter 5 Motivation at Work - . learning outcomes. definition of motivation. motivation - the process of arousing and

The Heart and Lungs at Work Chapter 6 - . the primary roles of the cardiovascular system. 1. to transport oxygen from the

Chapter 15 - Cycles Gone Wild - . objectives be able to explain how bacteria can aid in metal recovery from ore be able