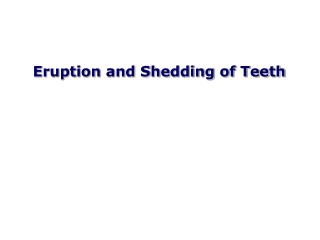 Eruption and Shedding of Teeth Eruption and Shedding of Teeth. Mixed Dentition: Presence of both dentitions. Figure from Ten Cate’s Oral Histology, Ed., Antonio Nanci, 6 th edition. Tooth eruption is the process by which developing teeth emerge through the soft tissue of the jaws and the overlying mucosa to

Eruption and Shedding of Teeth

HEALTHY CHOICES: Care of Your Teeth - . ms. mai lawndale high school. teeth. unlike many other tissues in your body, your

Pediatric Dental Care - . objectives. know the general pattern of tooth eruption understand the pathophysiology of the

The Teeth - . grade 3. introduction. what is the teeth? teeth of humans are small, hard , whitish structures found in the

Milk teeth &amp; Permanent teeth - . milk teeth. how many milk teeth? 20. what are the different kinds of milk teeth?

Bronze Age Thera - . a nd the eruption of santorini. places and people. timeline. the archaeologists . the sources.

Submerged deciduous teeth - . definition. the affected teeth do not come to the level of adjacent normal occluding teeth

Dental Nomenclature - . unclassified//rel to nato/isaf. dental nomenclature. in this lecture we will teach you the basic

Tooth Eruption - . tooth eruption is the process by which a tooth moves from its site of development within the jaws to

Tooth Eruption - . tooth eruption is defined as. “ the movement of a tooth from its site of development within the