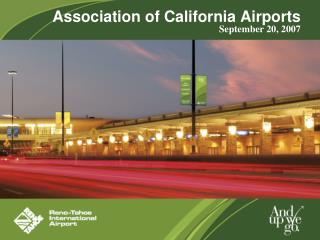 Association of California Airports. September 20, 2007. Great time to be talking about airports As we speak, congress is making monumental decisions regarding the future of aviation Reauthorization bills will impact every aspect of aviation for years to come California Association of School Psychologists - . you are casp. be a part of the only organization working to ensure