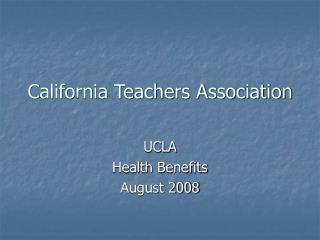 California Teachers Association Institute for Teaching - . you are invited!. closing the achievement gap by understanding

Ramapo Teachers’ Association - . appr contractual changes. why do we have to make these changes?. the new york state

Association of California Airports - . september 20, 2007. great time to be talking about airports as we speak, congress