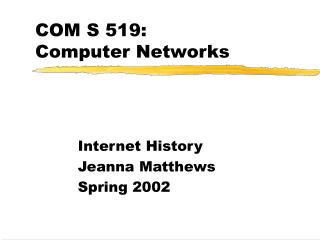 COM S 519: Computer Networks Internet History Jeanna Matthews Spring 2002 How did the Internet come to be?

Computer Applications in Business - . [bc-302] web ref. www.hcc.edu.pk/it. logically there is no difference between a

Network - . pajek. introduction. pajek is a program, for windows , for analysis and visualization of large networks

Computer Security CS 426 Lecture 36 - . perimeter defense and firewalls. announcements. there will be a quiz on wed there

CSE355 Computer Networking for Engineers Lecture 17 - Pre-game question. you have two ropes where each rope will burn

COMP519: Web Programming Autumn 2013 - . acknowledgment: the slides are derivatives of ones by dr. david reed . internet