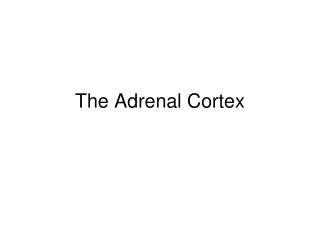 Adrenal Glands - . significance. the adrenal glands are complex polyfunctional organs whose secretions are required for

Adrenal Cortical Hormones - . endo 412. objectives of the lecture. 1- identifying the general structure of the adrenal

THE PATHOLOGY OF THE ADRENAL GLAND - . anatomy. the adrenal glands are endocrine organs consisting of both cortex and

Hormones of the Adrenal Cortex - . objectives name the hormones synthesized in and secreted from adrenal cortex list the

Let’s move to the Adrenal Glands - . in this space, please draw an adrenal gland…. where does it live, what is its

Adrenal Gland Digital Laboratory - . it’s best to view this in slide show mode, especially for the quizzes. this module

Adrenal Gland - . adrenal gland. anatomy was first described in 1563. is located above (or attached to) the upper pole of