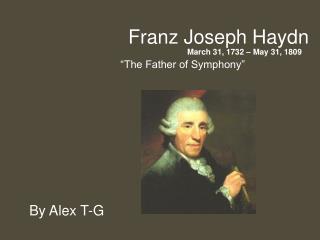 JOSEPH HAYDN - . symphony 94 movement 2. theme and variations. the beginning theme is simple. you are hearing section a.

Franz Schubert - . by emilee mccoy. franz was born on january 31, 1797 in vienna, austria. franz was never married which

God with Joseph - . note: any videos in this presentation will only play online. after you download the slideshow, you