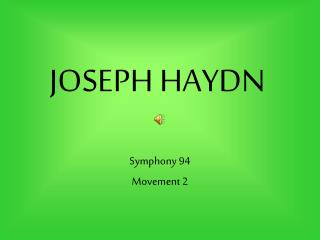 JOSEPH HAYDN. Symphony 94 Movement 2. THEME AND VARIATIONS. The beginning theme is simple. You are hearing Section A. It is played twice. The second time, it is softer. The strings use “pizzicato” (No, it’s not something to eat!) It means to pluck, not bow.