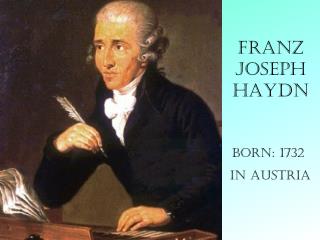 Franz Joseph Haydn. Born: 1732 in Austria. Haydn had neither the flashy individuality of Mozart or the romantic passion of Beethoven. He was more of a middle management type. JOSEPH HAYDN - . symphony 94 movement 2. theme and variations. the beginning theme is simple. you are hearing section a.