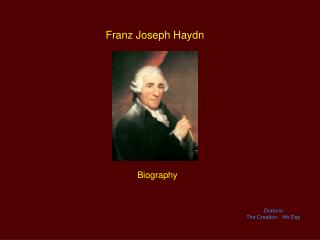 Franz Joseph Haydn. Biography. Oratorio The Creation - 4th Day. Franz Joseph Haydn (1732 – 1809) Austrian composer One of the most prolific and prominent composers of the classical period . Biology 1010C LSSC Dr. Joseph Silver - . in this chapter we will learn about the chemical building blocks of