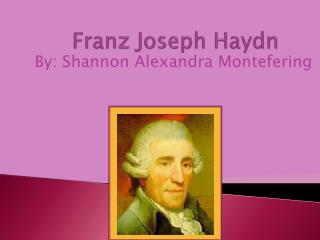 Franz Joseph Haydn. By: Shannon Alexandra Montefering . Franz’s Life. He was an Austrian Composer. He was born on March 31, 1732 in Rohrau, Austria ( which was a small village near the border of Hungary). His parent were Mathias Haydn and Maria. . Franz’s Life.