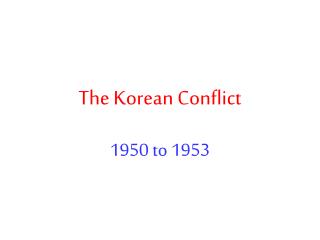 The Korean Conflict. 1950 to 1953. Truman & McArthur. Korea before the War. Korea was long influenced by the Chinese, Russians & Japanese. Japan controlled the peninsula from 1905 to the end of WWII. Conflict in “The Crucible” - . k. melvin. conflict. conflict – the struggle between two or more opposing forces.