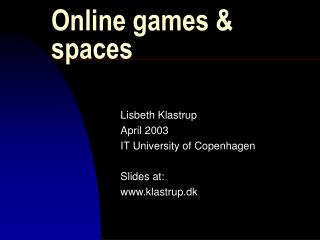 Online games & spaces Lisbeth Klastrup April 2003 IT University of Copenhagen Slides at: www.klastrup.dk Performative spaces? the creation of a space which enables and encourages the player to: act with the environment act as a character ”in” or player of a game Today’s topics