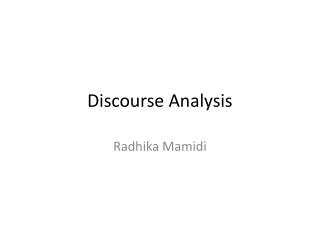 Discourse Analysis. Radhika Mamidi. Coherence and cohesion. What makes a text coherent? What are the coherent devices? Discourses have to have connectivity to be coherent. Eg . Ram took up a job. Shyam went to university.

TRANSACTIONAL ANALYSIS - . why intra-personal processes?. “in the ultimate analysis, all management is man management,

TOURISM AS SPECIALIZED DISCOURSE - . tourism. has only recently started to be investigated from a linguistic