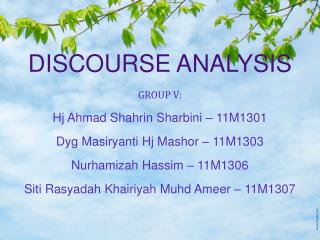 5. Analysis - . outline. analysis: bridging what to how models for analysis activities during object modeling object

Jean-Jacques Rousseau - . the discourse on the origin and foundations of inequality among men. jean-jacques rousseau.

Making the Most of Read Aloud Time: How to Boost Vocabulary and Comprehension Through Text-Based Discourse - . presented