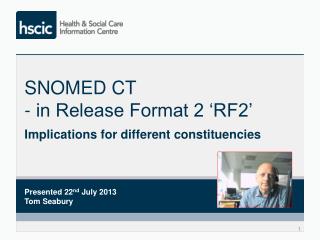 SNOMED CT - in Release Format 2 ‘RF2’. Implications for different constituencies. Presented 22 nd July 2013 Tom Seabury. Objectives. To share a sense of how SNOMED CT in RF2 can be fed into the terminology subsystems of an EHR system To give an RF2 comparison to the RF1 approaches

Creating an RTC Hot Fix - . september 18, 2013. steps for creating a hot fix. find the work item where the defect is

Accessible PDF’s - . adobe, acrobat, pdf. adobe is a company; they are the creators of acrobat. acrobat is a tool for

APA – The Format - . how to write your paper in proper apa format.