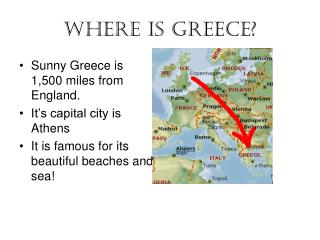 Where is Greece?. Sunny Greece is 1,500 miles from England. It’s capital city is Athens It is famous for its beautiful beaches and sea!. Ancient Greece. In Ancient Greece, the different cities were at war with each other. The most fearsome fighters came from the town of Sparta. The Climate. ALEXANDER’S LIFE A QUEST JOURNEY - . the world of alexander the great: a rehearsal for globalization. i. note: this is

Greece - . geography of greece. 80% of greece is mountainous peninsula (surrounded by water on three sides) pindus