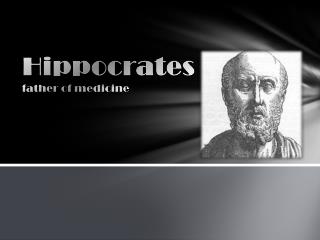 Hippocrates father of medicine. Life line. Hippocrates,the Greek physician, was born in 460 B.C in the island of Kos, Greece and died in 377 B.C in Larissa,Thessaly , Greece. The country of Greece. I am Hippocrates - . i am claudius galen. i am ibn sinna (avicenna). i am johannes gutenburg. i am andreas vesalius. i am

Farewell to Hippocrates: Medicine in the Information Age - . the quality colloquium at harvard university campus aug. 21,

Resurrecting Hippocrates: Food as Medicine Meets Modern Science - . “let food be thy medicine and medicine be thy

Hippocrates’ works (370 BC) - . the blood of females is subject to intermittent ‘agitations’ and as a result the

Hippocrates - . hippocrates of cos or hippokrates of kos (460 bc – c. 370 bc) was an ancient greek physician of the age

Hippocrates - . sarah schork. my scientist is hippocrates. hippocrates, also known as the ‘’father of medicine’’,

Fulness of the Father - . joseph smith it is the first principle of the gospel to know for a certainty the character of

Father - . ephesians 5:25 husbands, love our wives, just as christ loved the church and gave himself up for her.