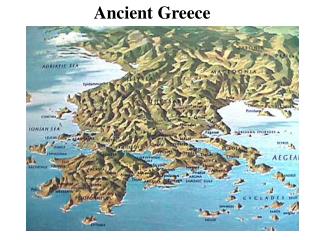 Ancient Greece. How did Geography Impact Greece?. Ancient Greece was not united under one government due to the mountainous terrain, and the many islands that make up this nation today. The Greeks had independent CITY-STATES , each had their own governments, military, economy.

AESTHETICS - . aesthetics while the current meaning of the term aesthetics and the study of it date from the 18th

Ancient Israelites - . they believed in one god who set down moral laws for his people. they recorded their history in