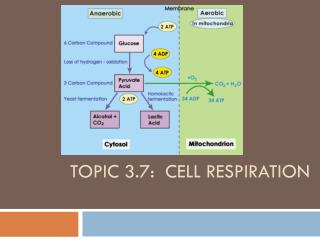 Topic 3.7: Cell Respiration. Assessment Statements. 3.7.1: Define Cell Respiration 3.7.2: State that, in cell respiration, glucose in the cytoplasm is broken down by glycolysis into pyruvate, with a small yield of ATP Respiration - . involves both the respiratory _ four processes that supply the body with o 2 and _. respiration.

Genetics - . topic 4 and 10. why sex????. http://www.pbs.org/wgbh/nova/miracle/program.html. chromosomes. chromosomes are

Unit 1 Cells and Cell Processes - . 1.1 characteristics of living organisms. what you need to be able to do: list and

Studying for the AP Bio Midterm 2011 - . answer key. which of the following organelles is the site of cell respiration?

ATP and Cellular Respiration - . breakdown of a glucose molecule to make atp so our cells can perform chemical reactions.