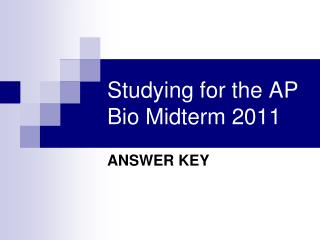 Studying for the AP Bio Midterm 2011 Studying for the AP Bio Midterm 2011. ANSWER KEY. Which of the following organelles is the site of cell respiration? a. Golgi apparatus b. Chloroplast c. Mitochondria d. Endoplasmic reticulum e. Ribosomes. 2. All of the following elements are found in a molecule of DNA EXCEPT

Studying for the AP Bio Midterm 2011

PPT Presentation for VendingLocator4u - Vendinglocator4u, one of the best vending machine locating company in the usa

AP GOVERNMENT POWERPOINT FOR - . the bureaucracy. keys to the “4 th “ branch. since it links all 3 branches together

AP Art History Midterm - . all images property of rea ap art history study guide, cd. this is an example of a long essay

Midterm Presentation - . becca howe arte 344. the road so far…. pre-college years. [aka the years we don’t like to