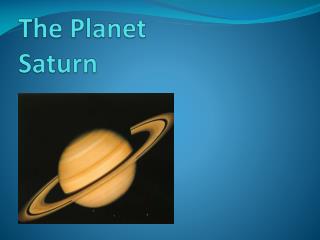 The Planet Saturn. Information. The sixth planet from the sun Second largest planet in the Solar System Saturn is just over 95 times more massive than Earth. Doesn’t have any solid material, just gas. Its atmosphere is made up mostly of hydrogen and helium. The Ringed Planet Saturn - . the moon just past 1 st quarter. the pleiades star cluster. astronomy and life on earth:.

Saturn 6 th Planet - . brett levine. saturn and the sun. 6 th planet distance from sun 887.14 million miles away from the

Saturn Saturn, god of harvest or time of reaping (sixth planet from the sun).