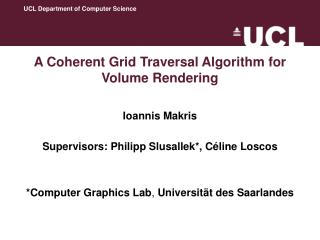 Volume Rendering - . lecture 21. acknowledgements. these slides are collected from many sources. a particularly valuable

Volume Rendering - . a volume representation is an extension of a 2d image to 3d space. a pixel in 2d space become a

Lecture 19 Traversal Algorithm - What is traversal. graph traversal , a process to retrace arcs so that each node of the

Footprint Evaluation for Volume Rendering - . a feed-forward approach - a.k.a. splatting. (we ‘used’ to be called