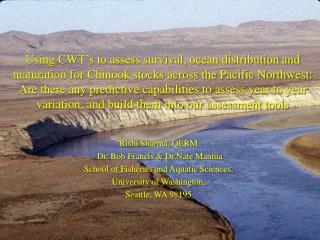 Using CWT’s to assess survival, ocean distribution and maturation for Chinook stocks across the Pacific Northwest: Are there any predictive capabilities to assess year to year variation, and build them into our assessment tools. Rishi Sharma, QERM Dr. Bob Francis & Dr.Nate Mantua

The Origin of Oceanic Trenches - . summary. deep folds, thousands of miles long and several miles deep, lie on the floor

Ocean Water and Ocean Life Chapter 14 - . chapter objectives. what are the principal elements that contribute to the

Stock &amp; Flow Diagrams - . james r. burns fall 2010. what are stocks and flows??. a way to characterize systems as

The Kwakiutl Indians - Northwest - . the people of the pacific northwest lived in a mild, rainy area with thick forests.