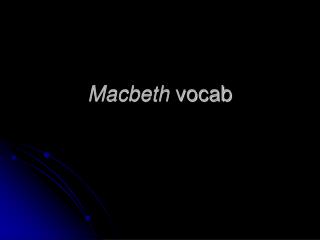 Macbeth vocab. Thane (n.). A nobleman under service of a king, much like a knight Known by the names of the places they ruled Macbeth=Thane of Glamis, Thane of Cawdor Macduff=Thane of Fife. Motif (n.). The repetition of an image, symbol, or idea in a work of literature Motifs in Macbeth Vocab Macbeth Act I - . to be, or not to be, that is the question. this above all, to thine own self be true. hurly-burly

Literary Vocab for Macbeth - . yay!. asides. it is when a character/actor in a play speaks in the direction of the