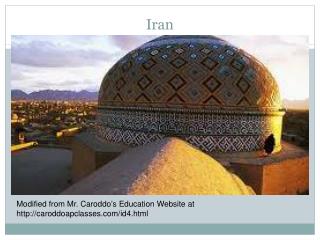 Iran. Modified from Mr. Caroddo ’ s Education Website at http://caroddoapclasses.com/id4.html. ISLAM. FIVE PILLARS OF ISLAM Declaration of Faith ( “ There is no God but God [Allah] and Muhammad is his messenger ” ) Prayer (5 times a day) Alms to the poor